An unusual infection on an unusual gastroenteritis

A 35-year-old lady was admitted to our Department due to fever and symptoms from the respiratory and gastrointestinal system. She was recently diagnosed with eosinophilic gastroenteritis and had been on steroids until two months prior to admission. Legionella pneumophila pneumonia was diagnosed and targeted therapy was initiated. The combined approach to the two entities is discussed as well as the options for maintenance therapy.

Eosinophilic gastroenteritis (EG) is a rare entity, part of eosinophilic gastrointestinal disorders, characterized by the symptoms caused from eosinophilic infiltration in the digestive tract. The clinical presentation is influenced by the layer of the gut involved; often the diagnosis is difficult especially in the serosal form. The etiology is unclear, possibly multifactorial [1].

We present a case of a young female with a background of EG, admitted with severe clinical picture from both the respiratory and the GI tract. The severity of symptoms and the recent steroid use (for EG) broadened the differential diagnosis including acute pulmonary embolism (PE), community-acquired pneumonias, and “eosinophilic pneumonias”.

A 35-year-old lady was admitted due to fever (39oC), abdominal pain, diarrhea and a non-productive cough for 3 days. She reported a history of asthma, atopic dermatitis, nephrolithiasis and smoking (30 pack/year). Her abdominal problems started 1 year ago when she underwent multiple urgent or semi-elective operations: appendectomy with subsequent gallbladder removal, followed by diagnostic laparotomy (6 months ago) with biopsies from a thickened jejunum to identify evidence of eosinophilic enteritis (muscular and serosal layers). She received treatment with steroids that was discontinued 2 months prior to admission.

Because of the severe clinical picture, impaired ABGs and the lung infiltrate, she underwent a ventilation/perfusion scan indicating a low probability for PE. On day 2 she had an unenhanced (due to strong history of allergy and no time for desensitization) spiral abdominal CT (Fig. 2), which showed a large amount of free fluid collection and thickening of several small bowel loops, without evidence of perforation. She did not consent to abdominal paracentesis. Viral and microbiology serological tests, as well as blood, urine and stool cultures were screened. Sputum induction gave suboptimal material for cultures. 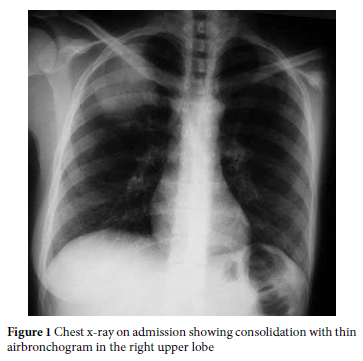 The patient gradually improved. An upper GI endoscopy was unremarkable and biopsies showed mild gastritis. As diarrhea gradually improved and ceased, and given that the patient had twice had a lower GI endoscopy over the previous months, with unremarkable findings, a third colonoscopy was postponed. PPD was negative. She underwent a spiral chest-CT negative for PE, while the lung lesion resolved. Her immunological tests showed very high IgE, with IgA, IgM, IgG, RF, ANA, ANCA within normal values. Hepatotropic viruses, adenovirus, CMV, HIV, EBV, Coxiella burnetii, Yersinia enterocolitica, and Entamoeba histolytica were negative. Stool for parasites and stool-urine-blood cultures were also negative. On admission the patient had a titer for Legionella sp. IgG 1/64 in serum which, when repeated at week 4 from the onset of illness, diagnostically rose to titer 1/128. Urinary test for Legionella was not performed and PCR for Legionella was unavailable from our lab at that time. The final diagnosis for this patient was Legionella pneumophila pneumonia – eosinophilic gastroenteritis. 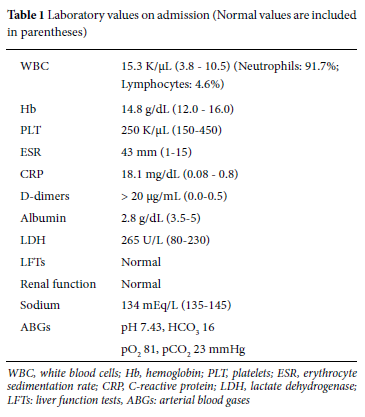 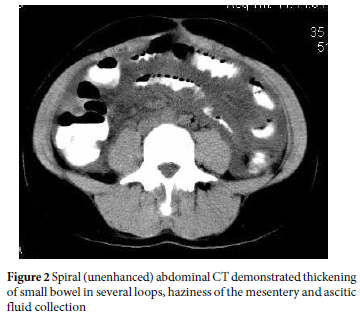 She completed 14 days of antibiotic treatment and had for her EG prednisolone 40 mg slowly tapered, ranitidine 300 mg, ketotifen, and calcium and vitamin-D supplementation. The patient had a straightforward recovery, and she subsequently underwent an MRI-enteroclysis to further study the affected small bowel (Fig. 3). Three years after the episode she remains asymptomatic without relapses. 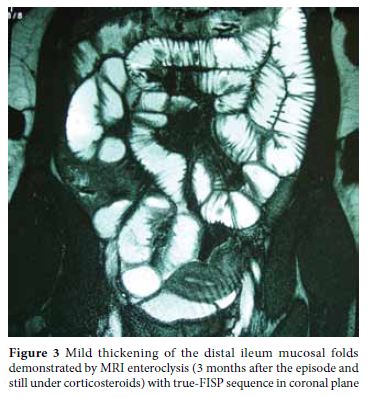 Various GI presentations have been attributed to primary or secondary (inflammatory bowel diseases, autoimmune diseases, reactions to drugs, hypereosinophilia syndrome, solid organ transplantation) eosinophilic disorders. EG is a heterogeneous disorder affecting children and adults, characterized by the presence of an intense eosinophilic infiltrate of one or multiple segments - from the esophagus to the rectum - and may infiltrate part or full thickness of the organ wall [2]. A strong history of various allergies may present in up to 25-75% of eosinophilic gastroenteritis patients.

Mucosal eosinophilic gastroenteritis is the most common although this may be due to easier diagnosis through endoscopy/biopsies; it usually presents with non-specific abdominal pain, nausea, diarrhea, anemia, or protein-losing enteropathy (occasionally there could be concurrent involvement of the deeper layers [3] with signs and symptoms of gastric outlet and intestinal obstruction). Serosal layer involvement occurs in 10-40% of EG cases and typically presents with ascites. It is associated with significant bloating, higher peripheral eosinophilia and better response to steroids (relapses are common and repeated steroid treatment is required). The diagnosis of this entity requires a high index of suspicion and exclusion of secondary causes of eosinophilia.

Corticosteroids are the treatment of choice for EG providing rapid and effective relief of symptoms, but long-term response and histological improvement has not been shown in large prospective studies [3]. Relapses frequently occur with tapering or after discontinuation of steroids therefore other options to maintain remission have been tested. Recent studies report successful treatment of eosinophilic gastroenteritis patients with budesonide, a corticosteroid formulation preferentially released in the ileum and proximal colon [4].

Ketotifen, an antihistamine and mast cell stabilizer, has been shown effective in improving symptoms and peripheral and intestinal eosinophilia in studies with EG patients, and sodium cromoglycate, a mast cell membrane stabilizer, in others [3]. A leukotriene receptor-D4 antagonist (Montelukast) has been reported as an effective steroid-sparing treatment for EG [5]. An infrequent association of Montelukast and Churg-Strauss syndrome (a rare form of eosinophilic vasculitis) in asthma is notable [6]. Lastly, small studies have shown benefit from specific elemental diets but large prospective studies are lacking [7].

In our case the differential diagnosis included PE due to the severity of presentation and the history of chronic inflammatory disease, which was excluded as appropriate [8]. The diagnosis of lung infection was supported from clinical radiological data, together with response to treatment. Legionella pneumophila has been shown to be an important microbial cause of community-acquired pneumonia. Preferred diagnostic tests are urinary antigen and culture of respiratory secretions. Serologic tests have the limitation of requiring measurement during convalescence with a titer of 1:128 considered diagnostic [9]. Cigarette smoking, chronic lung disease and immunosuppression (steroids) are considered risk factors to Legionella infection. Eosinophilic pneumonias represent a wide spectrum of lung diseases with peripheral and/or alveolar eosinophilia; they may present with varying symptoms, from asymptomatic infiltrates to ARDS. In our patient the clinical and radiological picture was not compatible and the confirmation of a specific infection excluded the diagnosis [10].

In conclusion, we have discussed the case of a young lady with a histologically proven EG whose course was complicated by a Legionella pneumophila pneumonia infection and treated as appropriate. The recent steroid use for EG and cigarette smoking were identified as risk factors for the infection. The diagnostic approach, the management and the therapeutic options to prevent relapses for EG were analyzed.

Acknowledgment: We acknowledge the valuable contribution of Dr G. Maltezakis, Consultant Chest physician, for his recommendations on the patient’s care.