An 83-year-old woman with a history of idiopathic pancreatitis 20 years previously presented to the pancreaticobiliary clinic for evaluation of a 1.5-cm periampullary mass. The mass was incidentally detected on a computed tomography scan (Fig. 1) obtained during an episode of diverticulitis that resolved with medical treatment. Endoscopic ultrasound (EUS) revealed a cystic ampullary lesion that communicated with the common bile duct (Fig. 2C). The pancreatic duct was seen to drain separately into the major papilla. Endoscopically, the subepithelial mass was proximal to the major papilla orifice (Fig. 2 A,B). The patient was diagnosed with type-A choledochocele and was referred back to the clinic to discuss potential therapy options. 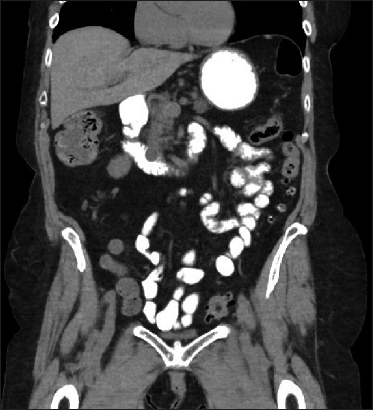 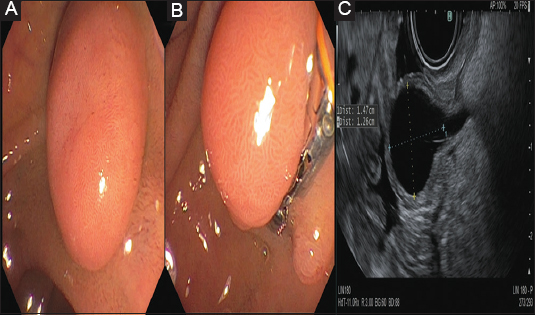 Choledochoceles are cystic expansions of the intraduodenal segment of the main bile duct and are classified according to their location compared with the major papilla [1]. Type-A choledochoceles are cystic expansions of a portion of the intra-ampullary bile duct and can be seen as submucosal bulges proximal to the major papilla. The bile duct drains into the choledochocele, which drains to the duodenum via the ampullary orifice. Conversely, a type-B choledochocele is a diverticulum of the intra-ampullary common channel and can be seen distal to the major papilla. Both types of choledochoceles can lead to biliary obstruction, pancreatitis, nonspecific gastrointestinal symptoms or (rarely) malignancy. Treatment should relieve ductal obstruction, remove associated stones or sludge, and assess for dysplasia, whether by resection or drainage into the bowel lumen via endoscopic or surgical techniques.